A parliament – or legislature – is the body of government responsible for making the laws of a country. Composed of representatives or politicians representing different geographical areas or constituencies, a modern parliament tends to have the following core functions: law-making; budgeting; oversight of government bodies, especially the executive branch of government; and representing the interests of citizens. In performing these functions, parliamentarians may use a number of procedures such as: introducing legislation and amending laws; scrutinizing ministers, civil servants and other government actors through questions, holding inquiries and hearings to receive expert evidence; and gaining access to official documents and information.

Parliaments play an important role in ensuring the implementation and monitoring of and compliance with international commitments at the national level. They are, in essence, the institutions formally in charge of making governments accountable for their international commitments. Notably, the 2030 Agenda acknowledges “the essential role of national parliaments through their enactment of legislation and adoption of budgets and their role in ensuring accountability for the effective implementation of our commitments.”1 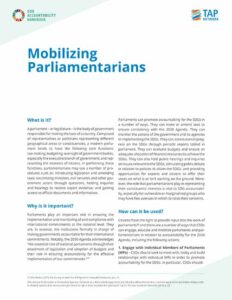 Parliaments can promote accountability for the SDGs in a number of ways. They can make or amend laws to ensure consistency with the 2030 Agenda. They can monitor the actions of the government and its agencies in implementing the SDGs. They can assess overall progress on the SDGs through periodic reports tabled in parliament. They can evaluate budgets and ensure an adequate allocation of financial resources to achieve the SDGs. They can also hold public hearings and inquiries on issues relevant to the SDGs, stimulating public debate in relation to policies to attain the SDGs, and providing opportunities for experts and citizens to offer their views on what is or isn’t working on the ground. Moreover, the role that parliamentarians play in representing their constituents’ interests is vital to SDG accountability, especially for vulnerable or marginalized groups who may have few avenues in which to raise their concerns.

The potential limits of parliamentary action for accountability for the SDGs

Parliaments vary greatly in their composition, structure and mandate, and not all parliaments will necessarily be able or willing to play an active role in SDG accountability. In some cases, a lack of parliamentary openness may mean that citizens are not informed about the work of parliament and thus are restricted from engaging with parliamentarians. According to the Global Centre for Information and Communication Technologies in Parliament, many parliaments do not provide public access to a variety of critical legislative documents that are necessary for citizens to be able to influence the parliamentary decision-making process, and even when such information is publicly available, it may not be presented in a manner that enables broad participation.2 In other cases, parliaments may not have the capacity to take on the heavy demands of the SDGs3 or there may be a lack of parliamentary oversight, with limited powers for parliaments to monitor or challenge the executive branch of government. Given these realities, it is essential that civil society actors assess – on an individual basis – the extent to which their parliament can support and promote accountability for the SDGs.

Citizens have the right to provide input into the work of parliaments4 and there are a number of ways that CSOs can engage, educate and mobilize parliaments and parliamentarians in relation to accountability for the 2030 Agenda, including the following actions:

b. Encourage MPs to legislate in relation to the SDGs – For example, CSOs can urge and support MPs to endorse or adopt the 2030 Agenda in Parliament, ensure that current laws are consistent with the SDGs, and propose new legislation in support of the SDGs.

c. Urge MPs to use their oversight role to monitor progress and action on the SDGs – CSOs can encourage MPs to monitor progress on the SDGs – for example, through regular progress reports or updates in Parliament – as well as to monitor and challenge the government’s actions in implementing the Agenda including its budgetary allocations. CSOs should urge MPs to use existing parliamentary processes – such as open debates, parliamentary ‘question time’ or ‘interpellations’5 – to question ministers on the implementation of the 2030 Agenda and to draw attention to particular SDG issues.

CSO engagement with parliamentary committees may take a variety of forms, including: educating committees on the SDGs through information seminars and training sessions; offering briefings, feedback and/or oral or written submissions to committees on SDG implementation (e.g. what is or is not working); and providing technical advice and expertise on SDG issues. CSOs can also advocate to influential parliamentary committees to have a thematic focus on the SDGs broadly or on specific goals or targets.

3. Participate in parliamentary hearing and inquiries – Parliamentary inquiries and hearings provide spaces where governments can be held responsible for their SDG commitments.7 One way that CSOs can engage with parliaments is by giving oral or written submissions on SDG implementation and/or review to parliamentary hearings and inquiries. Notably, the 2030 Agenda recognizes the role of national parliaments in supporting processes for regular and inclusive reviews of progress at the national and subnational levels.8

Parliamentary committees should have the power to call public hearings to garner citizens’ views on implementation as well as to call on government officials to provide information on the impact of its policies.9 Such hearings can also offer a mechanism for parliaments to receive citizen input on draft or existing legislation in relation to the SDGs.

4. Help connect citizens to parliamentarians – CSOs can play a key role in bridging the gap between legislators and citizens in relation to SDG implementation and review by organizing lobbying campaigns – such as letter writing campaigns – as well as constituent visits in parliamentarians’ electorates or districts. As elected representatives of the people, parliamentarians have an obligation to engage with their constituents throughout their term of office and not just during election times.10

TIPS for engaging with individual Members of Parliament (MPs)

CSOs can support the creation of informal cross-party mechanisms – such as parliamentary friendship groups – to focus on the SDGs or specific SDG issues. In many countries, issues-based legislative “friendship groups” exist within legislatures, bringing cross-party groups of legislators together around a particular cause.12

CSOs should consider innovative ways to engage with parliaments and parliamentarians in order to further accountability for the 2030 Agenda, including through the use of new technologies. In particular, CSOs can support the development and use of digital platforms and capacities – such as social media, mobile and SMS technology – to enable citizen engagement with parliamentarians.13 Many parliaments are adopting the use of digital technologies as low-cost ways to reach citizens in various geographic locations or who lack the means to participate in-person.14 Such technologies can be used by CSOs and citizens to offer direct feedback to parliamentarians on SDG implementation and review, provide comments on draft legislation, or submit letters or questions to elected representatives in a public forum.15

• Parliaments and the Sustainable Development Goals: A self-assessment toolkit (2016), by the Inter-Parliamentary Union (IPU) and UNDP provides parliaments with the framework to evaluate their readiness to engage on the SDGs and seeks to help parliamentarians identify good practices, opportunities and lessons learned to institutionalize and mainstream the SDGs into the legislative process.

• The Inter-Parliamentary Union is the organization of national parliaments that works with parliaments to safeguard peace and drive positive democratic change through political dialogue and concrete action.

Sierra Leone: In June 2017, Sierra Leone Coalition 2030, a civil society alliance for the SDGs, held a capacity-building retreat with 25 MPs. The training targeted the most strategic figures in parliamentary work on the SDGs: members of the informal Parliamentary Action Group on the SDGs and parliamentary leadership, including the Deputy Speaker, the Majority Leader and others. In order to maintain institutional memory beyond the electoral term, the training also engaged parliamentary clerks. The participants expressed the need to gain more knowledge on the SDGs to be better equipped to carry out their representation, oversight and monitoring functions. In addition to providing technical capacity, the training was also used as an opportunity to develop a memorandum of understanding setting out a plan for continuous engagement between the civil society alliance and members of the Parliamentary Action Group on the SDGs.16

Denmark: In 2016, Global Focus, a Danish network comprising 80 development and humanitarian CSOs decided to become more involved with the Danish parliament and government on the 2030 Agenda. One of the main challenges was the need to develop new relationships with MPs and government representatives beyond their existing allies in order to increase CSO influence on SDG implementation. Global Focus partnered with other networks and organizations, including the Danish 92-group (which focuses on the environment), the private sector, unions and local authorities to organize a major multi-stakeholder conference in the spring of 2017. More than 150 CSOs, politicians, government representatives and other stakeholders debated Denmark’s implementation of the SDGs at home and abroad. Following up on the conference, a Danish Social Democrat established an all-party coalition on the SDGs in the Danish Parliament with the purpose of engaging policy makers and civil society with the 2030 Agenda. The Coalition currently has 46 MPs, including representatives from all political parties, and meets several times throughout the year. Having demonstrated its capabilities to mobilize a wide range of stakeholders for the 2030 Agenda, Global Focus was invited to provide support to the Coalition’s secretariat and advisory board, in partnership with the Danish 92- group. This has translated into closer, institutionalized engagement with members from almost all parties within the Danish parliament, with strategic opportunities to promote issues on the parliament’s agenda and to recommend speakers for debates and discussions related to the SDGs.17

Calling all who work towards peace, justice, and inclusivity: we need your help! We are revising our flagship resource: the Goal 16 Advocacy Toolkit. https://t.co/d4dTv5jcDu

What issues do you want to see in the updated resource?
Let us know: https://t.co/D9AFcbNVDk