Awareness-raising is a process that seeks to inform and educate people about a topic or issue with the intention of influencing their attitudes, behaviours and beliefs towards the achievement of a defined purpose or goal.1 It can mobilize the power of public opinion in support of an issue and thereby influence the political will of decision makers.2 There are multiple awareness-raising strategies, methods and tools that can be used to convey and spread messages, and to gather the support necessary to influence public opinion.

Depending on the topic, awareness-raising efforts may include the following activities: issuing press releases, briefings and commentaries; disseminating reports, studies and publications; making written or oral submissions to parliamentary committees and inquiries; working with the media; holding public meetings and events; convening conferences and workshops; and creating and contributing to educational materials.3 Information may be disseminated through a range of different means or tools such as radio, television, video, film, the internet, social media, mobile phones, newspapers, newsletters, leaflets, poster campaigns and the arts. A variety of visual tools such as stickers, logos, t-shirts, armbands, bracelets and banners also may be used.4UNDP and DCAF (2008). p. 80.5

Awareness-raising and dissemination of information about the SDGs is critical to create an enabling environment for accountability, promote participatory and inclusive processes for follow-up and review, and build ownership of the 2030 Agenda.6 For example, awareness-raising can be used to promote an understanding of existing laws and rights in relation to the SDGs as well as opportunities to participate in public consultations on SDG implementation and review – including in relation to Voluntary National Reviews (VNRs).

Raising awareness of the SDGs among the general public – including awareness of specific SDG targets – is necessary in order for citizens to be able to hold their government accountable for the 2030 Agenda. All people – including marginalized and vulnerable groups – should be aware of and understand the commitments their government has made under the 2030 Agenda and how they can meaningfully engage in SDG implementation and accountability processes. Raising public awareness of the SDGs is also essential to foster the political and social change needed to achieve the ambitious agenda.

There are a number of actions that CSOs can take to raise awareness of the SDGs in order to further accountability for the 2030 Agenda, including the following: 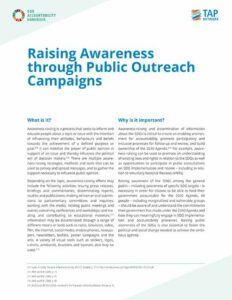 Targeting children and youth to raise awareness of the SDGs

Nearly half of the world’s population – approximately 42 per cent – is under the age of 25.9 Today’s generation of children and youth is the largest in human history. Children and young people can be instrumental as a target group to raise awareness of the SDGs and to put pressure on governments to follow through on their commitment to implement the 2030 Agenda. CSOs engaged in awareness-raising campaigns and activities can benefit from the participation and engagement of children and young people by tapping into their innovative ideas and strategies, as well as their strength in numbers.10

• Tailor your messages to your specific target group(s). • Try to localize the SDGs in your messages so that their relevance in the local or national context and impact on people’s daily lives becomes clear • Use evidence-based data and arguments in your messages. Numbers and research results can often be very persuasive. • Include stories in your messages. Storytelling is a powerful means to connect with people on a deeper emotional level and to motivate them to take action. • Refer to comparative examples from other countries or areas, if appropriate. • Avoid using jargon or acronyms that your target group may not understand. • Include a call to action as to what you want your target group to do, if appropriate. 11

Engage with vulnerable and marginalized groups in designing and implementing your awareness-raising strategy on the SDGs in order to leave no one behind.

2. Work in partnership and coalitions with other CSOs and stakeholders – Awareness-raising campaigns tend to be more successful and have a greater impact when they are conducted by a network or coalition of CSOs. The wider the coalition, the harder it is to ignore. Accordingly, CSOs should endeavour to build partnerships with other CSOs – at local, national and/or international levels – to conduct joint awareness-raising campaigns on the SDGs generally or to promote specific opportunities for SDG implementation and review. In addition to strengthening the power and reach of the campaign, these partnerships facilitate the exchange of expertise, knowledge and strategy among CSOs. CSOs may also wish to consider partnering with other key stakeholders such as National Human Rights Institutions (NHRIs) to promote awareness of SDG implementation and review processes.

3. Identify target audience and tailor awareness-raising initiative appropriately – CSOs should seek to identify the individuals or groups whose awareness of the SDGs is the most important to achieve their specific goal in relation to SDG accountability. Target groups may include key decision-makers, local authorities, parliamentarians, the media, vulnerable or marginalized groups, or the general public. Once identified, CSOs may wish to survey or assess the target group’s initial level of awareness through small focus groups. The results of the assessment can be utilized to tailor the awareness-raising campaign and its messages appropriately and to evaluate the impact of the campaign in the future.

6. Consider the timing of awareness-raising activities – While awareness-raising of the SDGs can be done at any time, CSOs may want to leverage publicity around major events – such as leaders’ summits and meetings – or relevant international commemoration days in order to increase the reach and impact of their message. The UN provides a helpful list of key international dates, many of which relate directly to SDG targets and/or goals.18

CSO forums are a useful venue for CSOs to reach out to a broader set of possible partners and to network with each other.

Use the right messenger to raise awareness of the SDGs. Ensure that your message comes from people who have authority and credibility among your target group.

• The Advocacy Toolkit: Influencing the Post-2015 Development Agenda (2014), by CIVICUS and Stakeholder Forum, provides detailed guidance on how to prepare for, implement and manage an awareness-raising and/or advocacy campaign.

• SDGs in Your Municipality: 50 Practical Awareness Raising Examples, by the Association of Flemish Cities and Municipalities (VVSG), offers practical examples to introduce the SDGs to a wider audience.

Global: Football is one of the world’s most powerful communication tools–reaching young and old in every corner of the world. In 2015, the Global Goals Campaign launched its #DizzyGoals Challenge, a social media public outreach campaign to raise awareness about the UN’s new 17 SDGs. Famous footballers and celebrities such as Gareth Bale, Gary Lineker, Alan Shearer, Liverpool FC, Spurs and Crystal Palace FC were among those who took part in the Challenge to raise awareness of the Global Goals. As part of the campaign, participants filmed themselves attempting to score “dizzy goals,” which involves running around a spot until the world starts to spin, and then trying to score a penalty kick in an open goal. The campaign gained massive traction worldwide and helped to make the new Global Goals famous. In addition to participating in the #DizzyGoals Challenge, the Global Goals Campaign used the social media campaign to encouraged participants to urge their leaders to show support for the Goals at the UN.19Action/2015 (2015). Hundreds of people are taking part in the Dizzy Goals Challenge.20

Over to 🇹🇱 Ministry of Finance to hear about community-driven development process at village level.